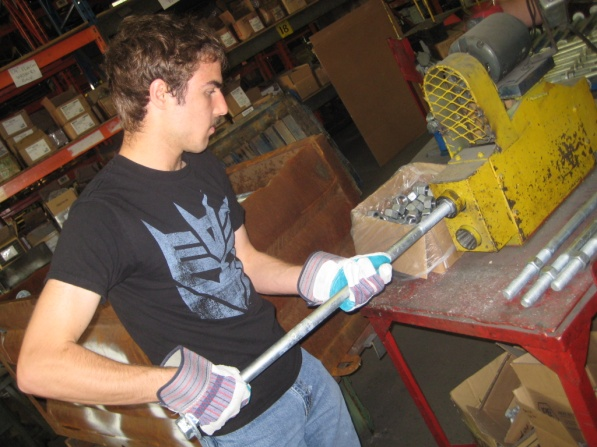 Alex takes a great deal of pride in his work, but he knows that his job represents much more than a pay cheque.  At 21 years old, Alex’s work ethic is mature beyond his years.

Alex has been working as a shipper-bolt assembler at Pacific Bolt Manufacturing since before he graduated from high school in June 2014.  As part of Kinsight’s Employment Services program, Alex was connected with Pacific Bolt when they needed workers for a large project.  The management team was so impressed with Alex’s reliability and attention to detail that when the project ended, they offered him a permanent position.

“Alex makes Pacific Bolt a happier place to work. He has such a positive attitude,” explains Carey Stankov, General Manager, Pacific Bolt Manufacturing Ltd.  “Alex’s production and speed has made a dramatic impact with the project we are working on. From his very first day, our employees wanted me to hire him,” he adds.

Alex has a sense of belonging and purpose that comes from being part of the fabric of Pacific Bolt’s workplace culture. He recognizes the value that his employer places on the contributions that he makes at work.

“I feel useful at work. I am helpful … I work hard and I get work done fast,” Alex says. “My job is fun. I feel happy to be part of the guys at work,” he adds.

Alex says he appreciates the things in life that result from having steady employment – choice, financial freedom and shape to his day. He lives in his own apartment and when he’s not on the job, he continues to work with his Kinsight Employment Facilitator to explore his ultimate career goal in visual arts.